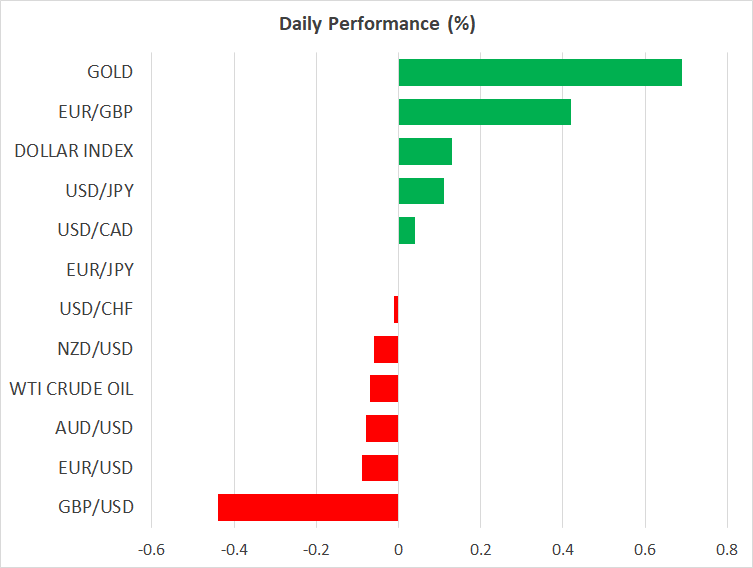 Euro takes to the skies

Global markets remained in a risk-on mood after the marathon-like negotiations between EU leaders finally bore fruit yesterday, resulting in a deal that will see substantial sums being funneled into the economies most devastated by the crisis. Even though the deal contains some caveats to appease the ‘frugal four’, like a veto mechanism where states can try to block payments to other states if they judge reforms aren’t implemented, this is still a huge achievement.

It diminishes downside risks for the European economy and sets a precedent that might ultimately give rise to a real risk-sharing instrument, like Eurobonds. The euro naturally liked the news, shooting higher to climb above the $1.15 zone for the first time in one-and-a-half years.

The euro’s gains came mostly to the detriment of the US dollar, which fell across the board to touch its worst levels since March against a basket of currencies. Beyond the euro, the dollar’s losses were exacerbated by the broader risk-taking mood among investors, who continued to divert funds away from the reserve currency’s perceived safety.

But US politics take the shine off stocks

As is typically the case, the sinking dollar helped lift all other FX boats, especially risk-sensitive ones like the aussie, kiwi, loonie, and pound. Moreover, the softer greenback helped catapult gold prices to new nine-year highs. Bullion is now trading near $1850/ounce, with the all-time high of $1920 increasingly coming into scope.

In fact, gold prices are already trading at record highs if measured in any currency other than the dollar, which implies that the greenback’s strength is the main obstacle keeping  gold from cruising even higher. Yes, the dollar has weakened lately, but it remains elevated from a historical perspective, so the missing ingredient that could accelerate gold’s rally is likely more pain for the US currency (see below).

Strikingly, the one segment of the market that wasn’t euphoric, was stocks. The S&P 500 (+0.2%) surrendered some early gains to barely close positive while the Nasdaq outright fell (-0.8%) after Senate Majority leader Mitch McConnel poured cold water on hopes for a new aid package before month-end, when many benefits expire.

This will be a major driver for markets. It’s an election year after all, and the two parties have very different visions for the size and scope of the next stimulus bill, setting the stage for a drawn-out negotiating process. While some compromise will almost surely be agreed eventually, investors may lose their cool if a deal isn’t imminent by the end of next week, as that would imply many lower-income Americans losing access to vital, consumption-boosting benefits.

Fed also on the radar

And there couldn’t be a worse time for Congress to play politics on stimulus matters, as the US economic recovery already appears to be plateauing amid the resurgence in infections and the rolling back of re-opening plans. This is evident in high-frequency indicators like credit card spending data and gasoline demand, putting more pressure on the Fed to act again at its meeting next Wednesday.

The next step for policymakers is likely to strengthen their forward guidance, for instance by committing to not raise rates until inflation hits some target, say 2.5%. If expectations for such a move start to mount ahead of next week’s decision, that could add more downside pressure on the dollar, turbocharge gold, and even keep stocks afloat.

As for today, there’s not much on the calendar, with the only highlights being a speech by ECB President Lagarde at 13:15 GMT and the latest inflation data out of Canada. As such, the spotlight may fall mainly on the earnings season, which kicks into high gear with Microsoft and Tesla reporting their results after Wall Street’s closing bell.